Yesterday we, from Oficina Uzyna Uzona, interrupted our rehearsal and went in solidarity to those who took Funarte intending to fight for the no Ministry of Culture’s money contingency, against its unreasonable two thirds cutting in the Budget.

Before going to this meeting, I’ve read the Group Manifest and was shocked by its bureaucratic language, “cover”, “parroting” (repeating stupidly) the Arabic revolution’s ENOUTH, LOSE PATIENCE.

A document that kidnaps Culture in a bad written text, and makes it prisoner of the academic illiterate political language, full of resentment, “indignation”, “intimations”, “requirements”, etc..

I’ve been, for more than 50 years, used to the language of a Left parody, that I call “a nível de” (pejorative colloquialism), or “cuecona” (“Mr. Fancy Paints”), but that was a democratic left. Oficina and Arena were friends, exchanged their divergences as creation.

As I’m in solidarity to social movements that make those who have the Power to “represent” us act not for State reasons, but for the real thing that appoints their Power, the Culture, I went there anyway. With desire, maybe even for professional and social reasons, of transmitting our divergences around a text that seemed to not “topple”, and get to our common goal.

We, from Oficina, by history sync, are staging our position, facing the actual positions that castrate Culture, through the staging of “Manifesto Urbano Antropófago” of Oswald de Andrade, staged as a “macumba” indeed, “mandinga”, to obtain what we want to provide to the world: the Bixiga’s rebirth through an Urban Cultural Passion Square – that we call “Anhangabaú da Feliz Cidade” (“Anhangabaú of the Happy City”) – result of our fight against the SS. Silvio Santos Financial Video Group, lovely human animal, after 30 years of War, offer us to exchange his Lands in the preserved surrounding area of Teatro Oficina, in return to Union land, the other Public Powers, to raise the Anthropophagical University, the Stadium Theatre and the Reforestation of BIXIGA.

We Culturally Express our desire to Public Art through the Art of Theatre and of Macumba Sorcery.

But, obviously, we’ll eat and be eaten by other Manifests that look for recognition of the Value even Economic specific of the Theatrical Art.

We went to the occupation, because we’ve been squatters of Teatro Oficina for 50 years, we have something in common, but do not agree in signing the Manifest in the terms formed by the Funarte occupants.

But, I saw what I’ve never expected to see: The building occupied by artists was closed with medieval bars. Am I out of my mind?!

I came in the room where there was an Assembly going on, and, when my presence in the Room was announced, I couldn’t help to ask: WHY ARE THE GATES CLOSED? DIDN’T GET IT.

In a HOMELESS or MST occupation it’s normal to take strict security measures, after all, they’re people who will live in the places they take, buildings or camps.

But in a “Culture Occupation”, in a concrete democratization of the formal democracy process we live, this occupation doors have to be opened to the Crowds. Even to those that not make Art or professionally produce the “Cultural Cultivation”.

If the Police appears to this manifestation consented by the State, it’d be the opportunity of having the support of the Police earthly beings to the Cultural Movement.

The Culture we make for everybody, of all classes, ages, for ourselves. The responsibility we artists have to produce, in the changing “batucada” of Life rhythm, is huge, the creation of New Common Values that are the Infrastructure where everything is based.

This Culture and Life creation symbiosis is blurred by Religions, Ideologies, partisan views that want to monopolize the interpretation of life.

And we have to produce our work, our fruits, from the own tree that is our Equal Human Animal Body, in anthropophagy, miscegenation, with our similar.

In the Art of Theatre, for instance, we seek the knowledge of the world both Social and Cosmic in our body, and we find out how colonized we were when discovering our vital pulse. So we crash layers and layers of Masks, Breastplates, with what the “Spectacles Colonizing Society” civilized us.

And we always do it together where we search for the maximum development of our Individual and Collective Potential. In these searches we create the energy, the fuel, the “axé” that give us, all the colonized, back our perception of having Human Power of Freedom and Creation to act deconstructing the old systems so news are born.

We realize, it were us human animals that created State, Corporations, Parties, Religions, Sciences, Economies, Systems, and it’s up to and from ourselves and our Art, interfere on what was created, but now, in the moment, draws, congests, infarcts, the natural movement of live procreation of the nature and the machines that serve us. At last Marx’s beautiful verse: the forces of production through the reunited mortals change the relations that stiffen live pulse fluxes.

Getting to Funarte as the director of, not sure, 30 to 50 actuators present in the play we were rehearsing, I asked for permission to give our contribution and support in the middle of the assembly that was going on so we could go back to Oficina to rehearse that night. I explained: we debut on August 16th, 50 years birthday of Teatro Oficina, and we are late because we’ve been rehearsing for six months, because of the public cuts in the Culture Area, without a penny.

I was luck to make a small participation in a Globo sop opera, and my torture indemnification has come. With this capital, and some small money that drips on the Production House of Oficina Uzyna Uzona, I go along everybody who has something in the Tyazo = Theatre Group, sharing money, food, bed, and looking for the money we need to be able to have the party we want on the 16th.

What move us is that we are in love with our creation, it inspires us to even create surviving strategies.

We opened our intervention in the Funarte Occupation, song the Ciranda  “Tupy or Not Tupy”, by the deceased big artist popular genius Surubim Feliciano da Paixão, inspired by the answer “Tupy” by Oswald to the question the Art of Theatre brought up to the human species: To Be or not To be.

Although some grumbled “here is not a place to party but to work”, the Majority adhered and “Ciranded”.

But I dared to make commentaries about the Occupants Manifest, that I’ve read, like a critic and democratic way to get together in a more effective text both for the public and the Power to grant what we intend to: the money owned to the Cultural area replacement, crucial in this moment in which Brazil grows and needs the Creative, inventive spirit to cross the wonderful End of American Empire changes.

But when I said that us from Culture were not “workers”, that go to the factory to make a car and receive a salary but “Culture Cultivators”, the “Worker” Taboo brought the colonized unconscious of Imaginary and Repertoire of the Classic Gestures of the 19th Century Worker, of the threatening Roman Fascists Crossed Arms, expelled by an atomic bomb energy pressed by Hate.

We were being expelled by disagreeing to the old words Xerox Manifest, written without Specific Cultural whimsy.

Slaughtering sounds made us leave in one to one line, like in the Ibiúna UNE students prison in military dictatorship.

I felt the precious Unlock of the Ministry of Culture Budget cause captured by a Mafia, of one of the “Hate Groups” that are fashion in the old Capital Patriarchal Order agony.

The Occupation is Autophagic. Either People or Media do not get in. It’s restricted to a Commanded Group. Instead of taking Funarte, make the Cultural Space work as we dream of, studying intelligently and poetically effective, new, strategies that sound the ears with the irresistible seduction of Art, I saw a gang of Inexperienced Scouts, more worried about the Kitchen rotation than the Today Brazil Cultural Kitchen.

In this anti-Anthropophagic isolation, I repeat Autophagic, they worship the belief in a Almanac Ideology that mistakes the São Paulo Left Fight, with the Skin Heads and the TFP. They’re undertaken by a phobia, an Oficinaphobia that is not different from the Homophobia. They believe in a unique truth that came canned with the words “ENOUTH”, “WE’VE LOST THE PATIENCE”, “WE’RE OUTRAGED”. As if someone could have the feat of creating, anxiously, indignantly, heatedly, the lose of Pa-Science.

So, what I saw yesterday, worshipping the Hate Fundamentalism. They act like a Gang that have taken hostage the Cultural Movement. To, in the future, become congressmen and get into the Public Power Gangs.

The Impression I had was the worst, but I put faith in some soul-bodies that were there to notice this Hate Show that the OficinaUzynaUzona presence brought out and transmute this Hate into Love of Life, of Culture, of Creation, of Diversity.

This Occupation in the name of Culture has to open its doors to everybody, ‘cause Culture is desire and necessity of any human being. And listen the ones who disagree with this Occupation way. Culture is part of Biodiversity. Its biggest inspiration is Freedom, the Art of desire to co-star with its Opposites, without “COMMAND WORDS”.

It’s impossible for an artist, a creator, that has to make up strategy, values, solutions, submit himself to “COMMANDS WORDS” of canned conscience.

The Cultural Social Movement is Politic in itself, is Human Power, Free, do not serve to any Religion, Ideology, Party.

The Culture cannot be manipulated by what they unconsciously call “Politic Conscious”.

Maiakowiski for me represents all the humanity fight for freedom of Art. With his verses he have proved, in the Russian Revolution, that had the same, or more, value than factories.

In the failure of religion, ideologies, of al “isms”, including capitalism, era itself, we have the extraordinary opportunity of going along the GREEN ECONOMY that, once overcome the Industrial era Colonial Taboos Obstacles, will come so quickly as the Internet. At this moment, Culture is Gold and exists against it a prejudice, I noticed yesterday, bigger than Racism, Homophobia. It’s urgently needed that from our creation we fight to declare Culture’s Independence, and the recognition of its Incommensurable Power.

I wrote in the presidential elections a text of support to the President Dilma Roussef, even feeling that at that time she, as Caetano Veloso, could not notice the importance of Lula’s Government in the Ministry of Culture potentiating in its Budget for the first time in the Brazilian History and germinating a Cultural Spring to explode in the year 2011.

I feel that us, Artists, we can make President Dilma Roussef see the importance of the Ministry of Culture Budget by being so proud of Lula’s, Gil’s, Juca’s Management for the WONDERFUL POVERTY ERADICATION IN BRASIL strategy.

Without creativity, invention, scientific and artistic spirit, this goal will not have drive from the crowd to happen.

The Brazilian people Enthusiasm for football, carnival, creation of culture that is produced is the PRE-SALT of the END OF BODY AND SPIRIT POVERTY.

Since 1968, it were the indians that taught us, the occupation is a way of legitimate direct democracy, I’m entirely in favour, but may it not be in a jail.

To the Funarte Prision Haters.

To the Department of the Treasury Safes. 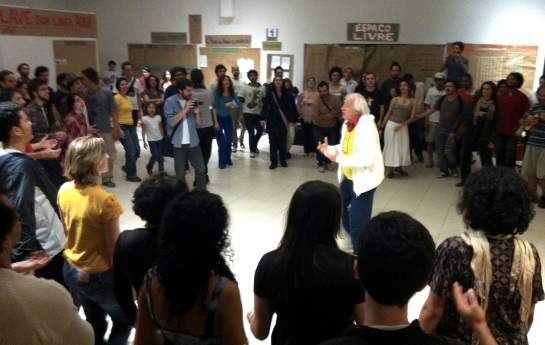